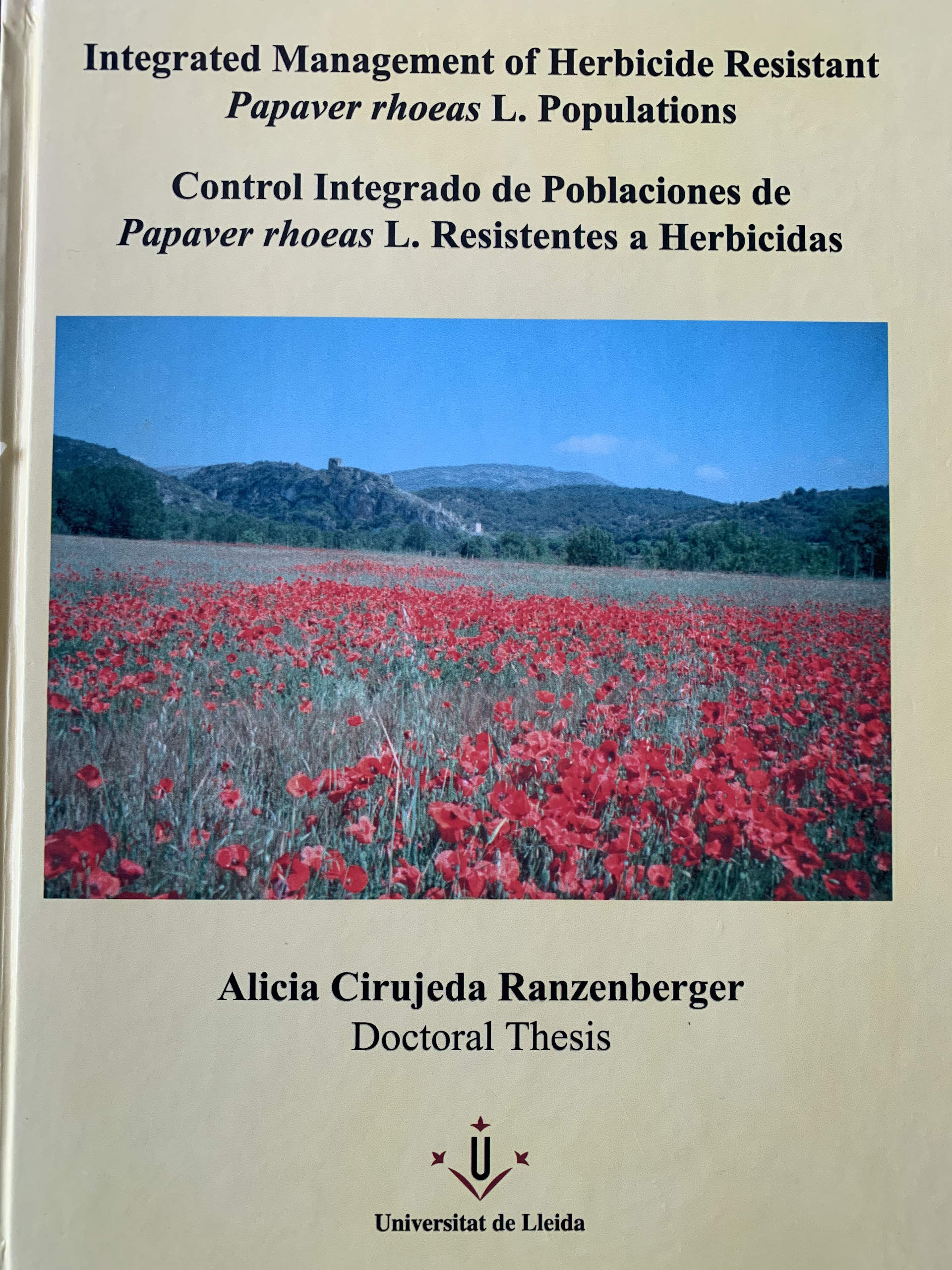 Herbicide resistance towards the herbicides tribenuron-methyl and 2.4-D was detected in most of the 148 analysed Papaver rhoeas L. populations collected in a semi-directed field survey in North-eastern Spain. The most frequent situations found were populations slightly resistant to 2.4-D and with a high frequency of resistant plants towards tribenuron-methyl. One seed-based quick-test for each herbicide on agar medium was developed and found valuable for detecting herbicide resistance after validating with greenhouse and field trials. In the case of tribenuron-methyl, the test allowed to quantify the frequency of resistant plants, while in the case of 2.4-D the resistance degree was expressed with a hipocotyl length ratio. Resistance towards tribenuron-methyl seems to be caused by a target-site mutation, while resistance towards 2.4-D is probably metabolism-based. In the study area, P. rhoeas germinated mainly in autumn and early winter, especially between October and December but was detected since September until April, depending on the locations and on the year's characteristics. No differences in germination habits were found between susceptible and resistant populations. Depending on the climatic conditions, germination was found between 12 and 70% during the first season for freshly sown seeds. Seeds, which did not germinate after the first season probably entered in a secondary dormancy stage. Cultivation clearly stimulated weed emergence and could be used in field to favour germination. A general strong natural weed mortality was detected in most of the years and fields. In spite of this, high initial weed populations reached often still 300 plants m -2 at the end of the cropping cycle. Ploughing was found to be an effective method for placing P. rhoeas seeds in a non-favourable position for germination. An average reduction of around 40% emergence was observed. Regardless if the P. rhoeas population was susceptible or resistant, between 63 and 99% P. rhoeas seeds were still viable 31 months after burial in soil at 20 cm depth. Therefore, ploughing should be conducted occasionally only as the seeds moved upwards again were able to germinate. Harrowing can be an effective control method of herbicide resistant P. rhoeas but require an accurate observation of the weed and crop size. The effect of pre-emergence harrowing were very little or inappreciable. In post-emergence harrowing should better be conducted at early growth stages of P. rhoeas. As this species has a tap root, efficacy decreased if plants were too big. In dry years efficacy was higher as damaged plants could not recover. In better moisture conditions, P. rhoeas plants often recovered after being buried so that initial high efficacy decreased in time. In few occasions harrowing stimulated germination. Mechanical control of P. rhoeas by harrowing was insufficient in some trials but reduced weed plant number in all cases. Chemical P. rhoeas control was possible with herbicides of different classification groups defined by the Herbicide Resistance Action Commitee (HRAC). In pre-emergence, pendimethaline, trifluraline + linuron and trifluraline + chlortoluron were the most effective and most regular herbicides. In early post-emergence a less constant but quite high control efficacy was achieved with MCPA + diflufenican, isoproturon + diflufenican and tribenuron-methyl + metribuzine. In late post-emergence, mixtures containing ioxinil or bromoxinil, especially bromoxinil + MCPP, ioxinil + bromoxinil + MCPP as well as florasulam + 2.4-D often controlled the herbicide resistance populations well. In order to prevent and to manage the herbicide resistance in P. rhoeas these different control methods should be used together, defining an integrated weed control strategy.